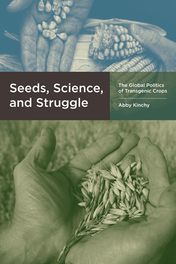 Food production is a growing problem for society. We must continue to feed ourselves, despite degraded water and soil, a changing climate, and growing population. But our food problems are also problems of society. Social organization and practices have created widespread hunger and malnutrition, have minimized biodiversity and degraded farmland, and have led to the concentration of power in the hands of just a few global agribusiness companies. If we are to continue to feed ourselves and our neighbors around the world, we must look carefully, and critically, at the social organization of the food system. What kind of agriculture do we want? What values should it represent? How can we fairly distribute the benefits of our food system and minimize the harms for all?

In the world of farm policy and food regulation, many prefer to reduce all questions about the food system to quantitative risk calculations. Seeds, Science, and Struggle, published by the MIT Press in 2012, documents the growing challenges to that reductionist approach to agricultural governance. The book focuses on examples of social protest against genetic engineering and in defense of alternative forms of agriculture in Mexico and Canada. I examine political conflicts surrounding transgene flow--the genetic contamination of agricultural crops and food resulting from pollen drift and seed mixing. In each case, advocates of alternative agriculture confront what I call the scientization of biotechnology politics, the elevation of scientific risk assessment over questions about the compatibility of transgenic crops with other social goals. The research demonstrates the shortcomings of dominant models of scientific risk governance, which marginalize alternative visions of rural livelihoods and sustainable food production.

Reviews of Seeds, Science, and Struggle: